Sometimes there’s nothing better than just walking along the banks of a small stream and watching the dragonflies,damselflies flutter along above it. On this particular occasion whilst walking along one of the streams in Sri Phang-nga National Park i was lucky enough to see the aptly named stream glory damselfly.

I was slowly walking along, when suddenly a bright flash of green caught my eye.It took off from one of the rocks in the stream and flew away just above the water. It’s brilliant metallic green wings shone in the dappled sunshine like two gemstones; and then almost as quickly as it had appeared it landed, closed its wings and was gone.

I had to find out what it was;  I’d never seen anything like it. I headed down stream in the direction it took off  in hoping it’d fly again and reveal itself. Each time I spotted it and tried to get closer it’d fly away before i could snap a picture. Finally after a lot of careful wading up and down the stream and numerous attempts to take a photo, it eventually landed on a rock near me. 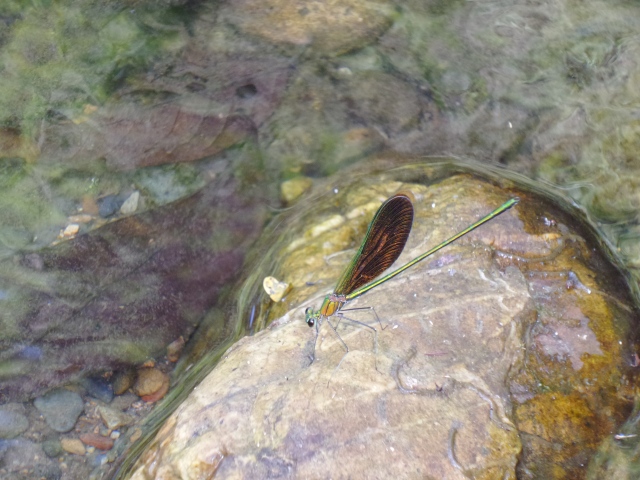 It was without a doubt the prettiest damselfly I had ever seen, but the outside of its body was not even the best part. I had to try and snap a shot of its brilliant green wings open.

In flight it was to fast to snap a shot of and when it landed it would only open its wings for a fraction of a second.  I decided a video would be the easiest way to capture its amazing wings.

So here it is, it’s only a short video but you can see it open its few times.