Let me introduce you to the red-necked Keelback (Rhabdophis subminiatus), a beautiful snake that has the distinction of being one of only a handful of snakes (17) in the world that are known to posses both venom and poison, and it can be found here in Thailand.

When talking about snakes many people confuse the terms venom and poison much to this dismay of many herpetologists. So, lets clear things up: poison is a  substance that is harmful when eaten or absorbed through the skin, but venom is a harmful substance that must be injected into your body via fangs, stingers or spines. Here’s an image to help you remember the two. 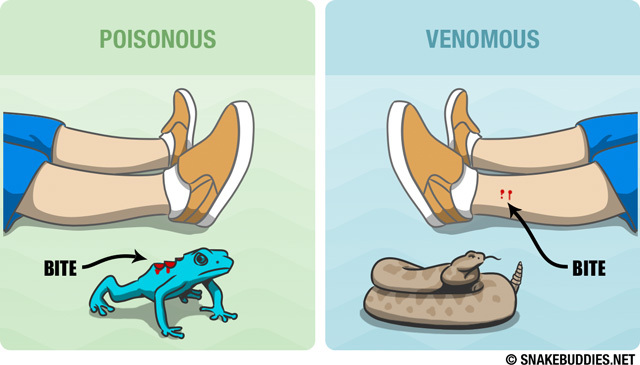 Do any other Snakes In Thailand posses Poison?

Poison in snakes is still being investigated but so far “among more than 3,500 species of snakes, only 17 Asian natricine species are known to possess nuchal (poison) glands or their homologues.” (Takeuchi et al 2018). Among these snakes at least 4 can be found in Thailand and they are the:

Something eye catching about these snakes is that they all seem to have aposematic (warning) colouration especially in their juvenile stages. Most of them have bright colouration around their necks, where the nuchal (posion) glands are located. For some it is apparent in their names like the red-necked keelback, the orange-necked keelback and for others just in their appearance. Interestingly the bright bands of colours around their necks are brighter in juveniles and fade or even disappear when they become adults, probably as there is less need for it once they attain greater sizes.

So where does the poison come from?

The poison itself,which consists of chemicals called bufadienolides comes from the snake’s diet of toads whose skins contain the poison. The origin of the poison was demonstrated by experiments in which snakes of the same species from areas without toxic toads, or those fed on a non toxic diet were compared to snakes from areas where the toxic toads were present. The poison was found to be absent in the glands of snakes whose diet lacked toxic prey. It was also demonstrated that mothers who possessed the toxins in their glands could pass it down to their hatchlings. (Hutchinson et. al. 2007)

So how do they use the poison?

The poison is stored in special defensive glands called nuchal glands which are located under the skin of snake to be used as a defense against predators. They glands are pretty unusual as they have no ducts or tubes from which the poison can flow (Mori et. al. 2012). It is thought that the snake can rupture these glands with strong muscular contractions or maybe an attacking predator may accidentally rupture them.

These snakes present these glands to would be predators when they feel threatened in a behavior called ‘neck butting’ which you can see really well below.

So these snakes can manufacture poison, but what about their venom?

Red-necked keelbacks (Rhabdophis subminiatus) were previously listed as non-venemous but they have recently classed as venomous after a man was bitten by one he was keeping as a pet which lead to him being hospitalised with major complications. (Seow et. al. 2000). Their venom is potentially lethal and  has a similar rating to that of the deadly Banded Krait (Bungarus fasciatus) which is also found here in Thailand. (Vern Lovic 2015) Most of the species which possess nuchal glands come from just one genus,  Rhabdophis and so it is advisable to be careful when it comes to any member of the genus. (Mori et. al 2016)

So, in conclusion you’d would be correct more than 90% of the time in saying that a snake is venomous and not poisonous, but, once  again mother nature provides another remarkable exception to one of her rules. I can’t look at one of these beauties without remembering that. 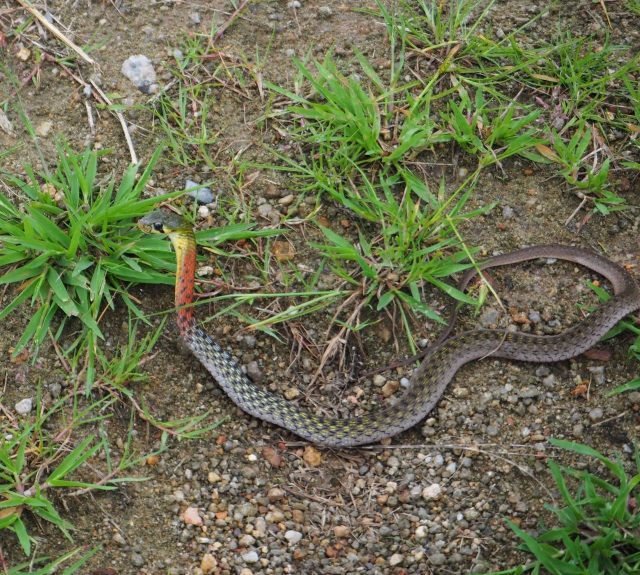