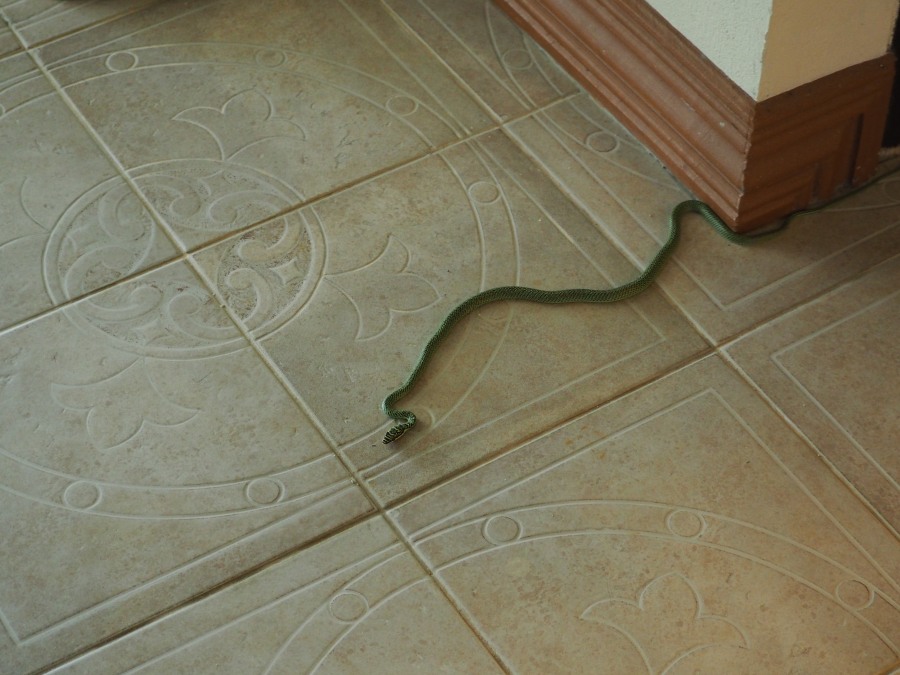 I was at home sick from work one day resting in the bedroom when I was disturbed by our dog, Bones barking incessantly at something from inside the house. Probably a cat that had ventured into our garden again, I thought. I rolled over in bed and did my best angry dog owner voice to get her to be quiet but she wouldn’t stop barking. After trying to calm her down from the comfort of my bed I decided to go and see what had her so upset. I begrudgingly got out of bed and headed to the front door.

Bones wasn’t by the front door though, she was standing in the middle of the living room, with a focused nervous look on her face barking in my direction. I looked down and there, not more than half a meter from my feet was quite a large snake, needless to say my heart was racing at this point. I grabbed Bones and put her outside, I grabbed a golf club as a makeshift snake hook and then I went back to the snake for a second look. I was relieved to find on closer inspection that the snake was an Ornate Flying Snake (Chrysopelea ornata) a mildy venomous species which poses no threat to humans, still I didn’t want to be bitten by it anyway. Now I faced the dilemma of how was I going to get it out of our house? With little flying snakes I would just pick it up with a stick or something and move it somewhere else. But this one was largest one I’d ever seen (just short of a meter long) and after being confronted by a large angry dog it was pretty angry itself and was lashing out wildly and with lightning speed whenever I got too close. 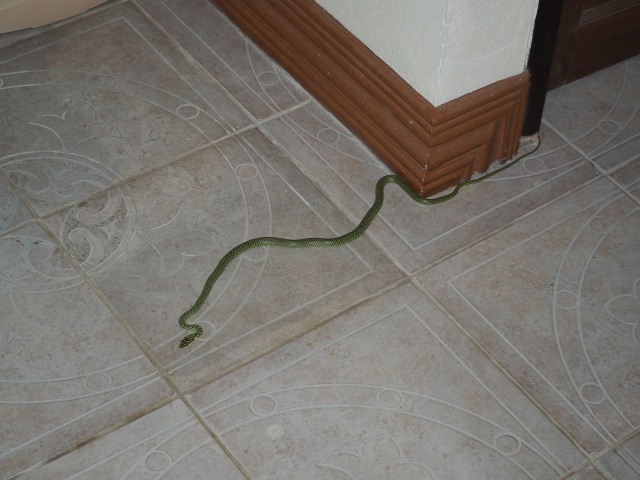 I tried to lift it up with the golf club but it made a dash for our shoe rack and disappeared somewhere under it. I carefully pulled out the rack to reveal a coiled up snake in the corner. Suddenly finding itself cornered it decided to make an attempt to climb straight up the wall to escape. I realised that this was probably the best chance I was going to get to grab the snake so I moved in………. 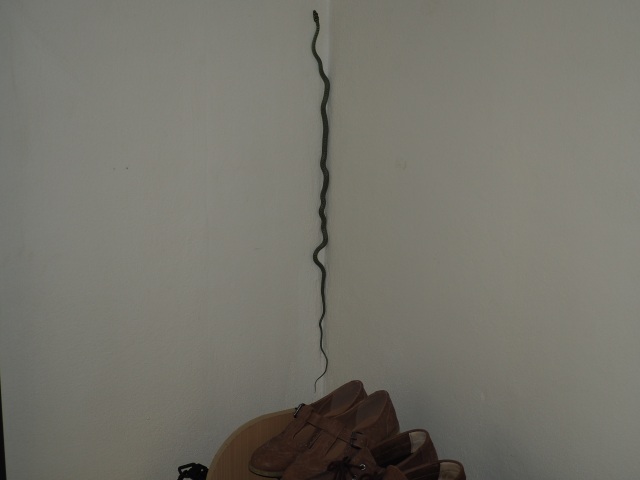 I tried to get it onto the golf club but my attempt  backfired and it made a very ungraceful dismount from the wall, lashed out with a lightning fast strike and then slithered back into the shoe rack. Time for a new strategy!

Using the golf club and a shoe horn I managed to get it to slither through a gap in the front door and outside of the house. It then made a break for the wall near the door and using the other golf clubs it effortlessly climbed up the wall. 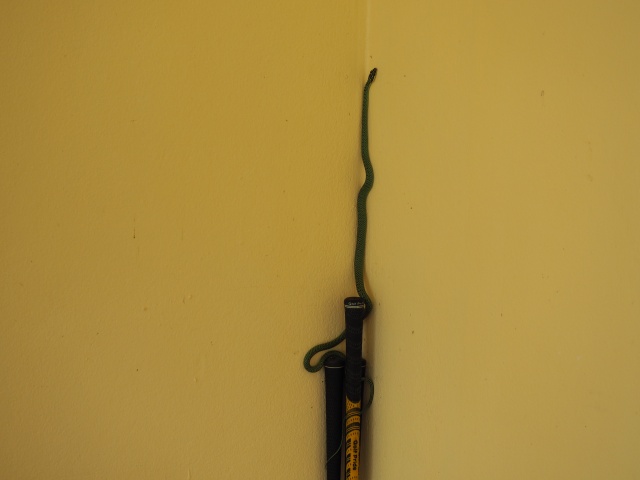 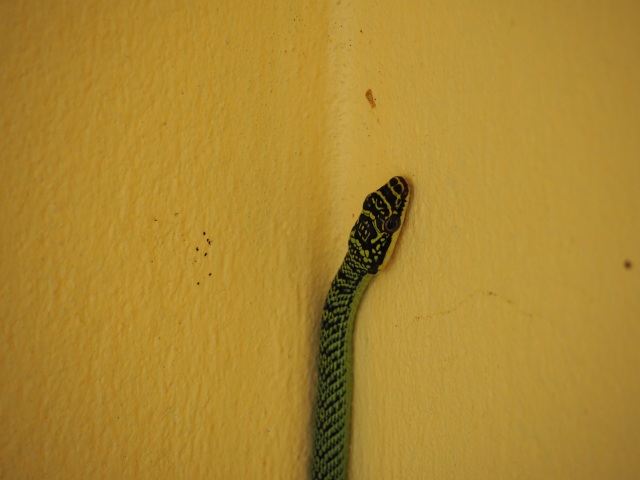 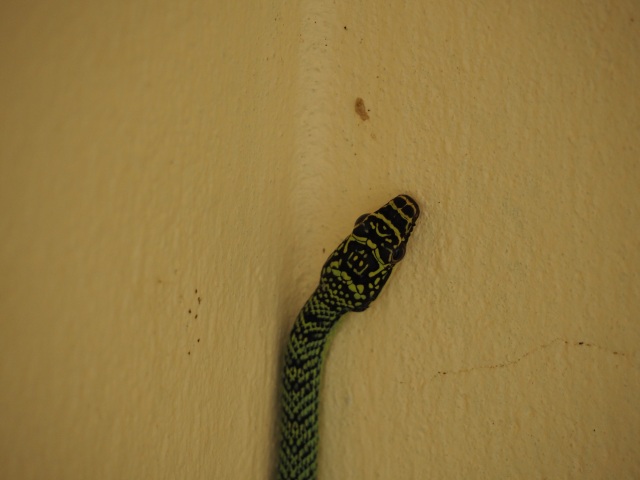 I had to move the snake away from the house and to do this I needed a new plan. I carefully positioned a bag under the snake, then I slowly moved each golf club out of the way until it was only balanced on one and then with a little tug on the last club the snake dropped down and straight into the bag with a satisfying plop.

Now I had the snake I could take it away from our house and release it into a nearby tree. I placed the bag on a branch and slowly up ended it until the snake slid out and onto the branch. It took off into the tree effortlessly moving through the branches until it was at the top of the small tree where its beautiful mottled green scales blended in with the trees leaves and branches so that from a distance it was almost invisible. 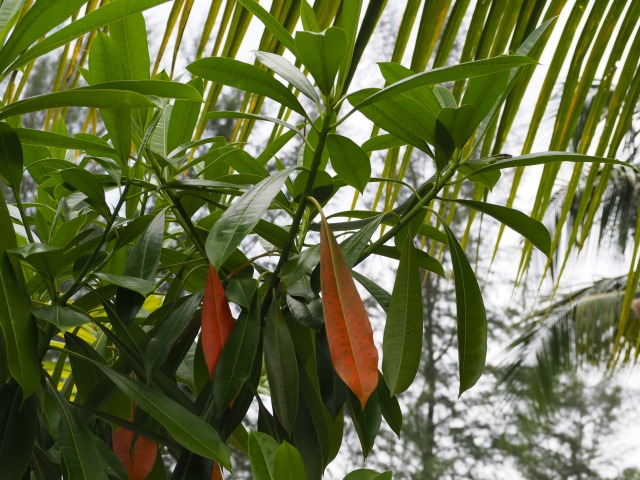 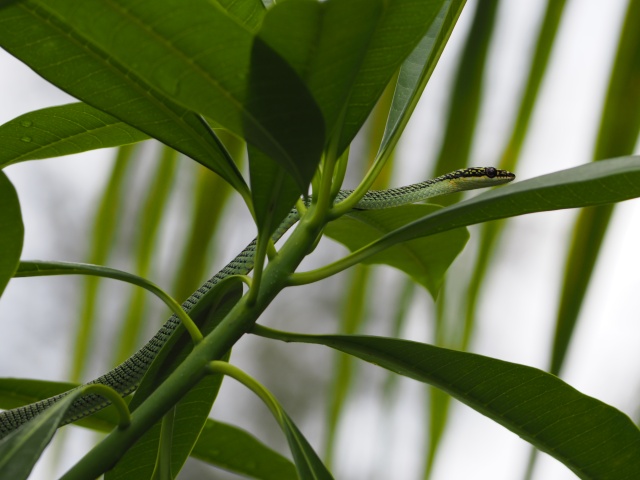 I went back later on to see if it was still there and sure enough after looking into the tree for a while I spotted a slender face staring back at me. 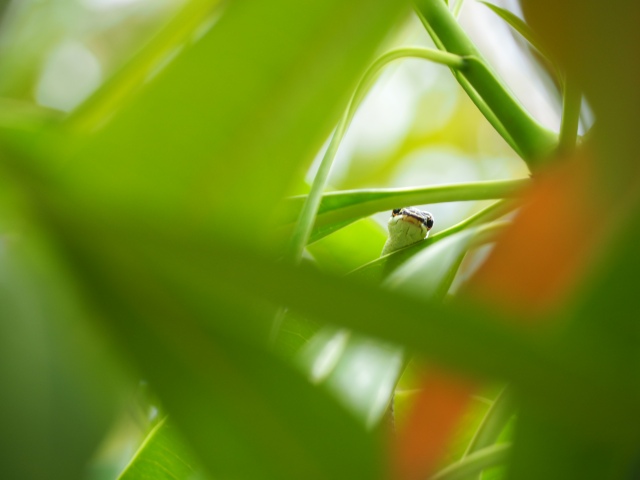 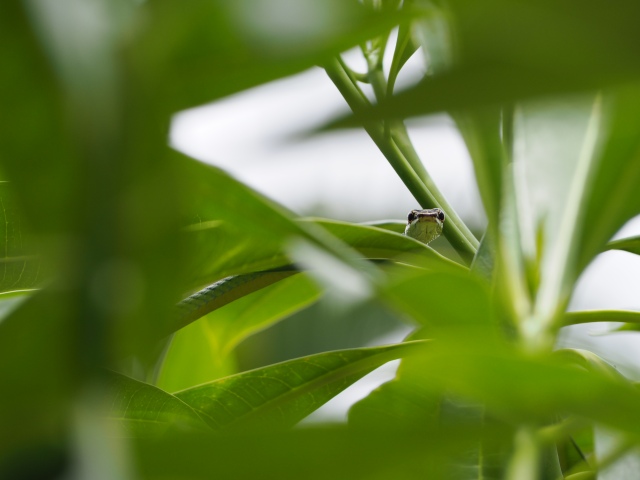 I snapped some more shots and then the snake decided it had had enough of me. It moved to the edge of one of the branches and with a short leap it was in a tree next door. Soon it had slithered to the top of the tree from where it crossed over into a palm tree and dissapeared among the branches. Hopefully it’ll stay out of peoples houses in the future as sadly, snakes that make their way into Thai peoples houses don’t usually emerge alive. Even though it gave me the fright of my life I hope its doing well somewhere and growing even bigger.