One night I was having dinner when I noticed that there was  a visitor on the table, a flat tailed house gecko (Hemidactylus platyurus), slowly inching its way towards my drink.  It was a little timid at first and If I moved slightly and it felt that it had been spotted it’d make a dash for the edge of the table and disappear under it. I kept still and moved my drink a little closer to the edge of the table and waited to see what’d happen. After a while it grew a little more bold and after a couple more minutes it finally reached my drink. It stopped, and suddenly the reason it had been inching its way to my drink became apparent. It slowly began drinking the condensation off the bottom of the glass, lapping it up with its little round pink tongue.

It was wonderful to see but sadly I didn’t get any pictures of this as whenever I lifted the camera to take a pic it would dart away. It stayed for a little while though, lapping at the glass, and after drinking its fill, it paused for a while just long enough for me to take a picture and then it was gone again.

Watching the little guy sharing my drink was pretty cool but there was another visitor to our table who hadn’t arrived yet and this time the visitor wasn’t after condensation.

Another gecko had appeared on my table but it didn’t seem interested in my drink. My curiosity was sparked, and i began to remember a video I’d seen earlier that week in which a guy was feeding lizards a piece of apple on a beach.(check out the video here Feeding Lizards).

Was this guy after something more substantial than just a drink of water? I took a small piece of watermelon and placed it near the edge of the table and waited, this time with my camera ready.

The new gecko crawled across the table to the watermelon and began to eat it. 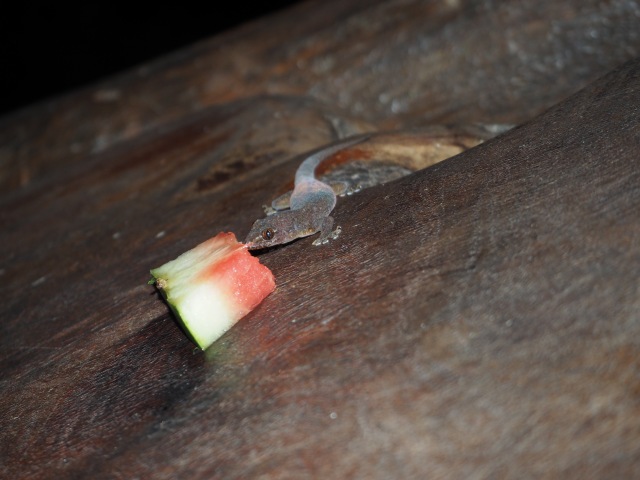 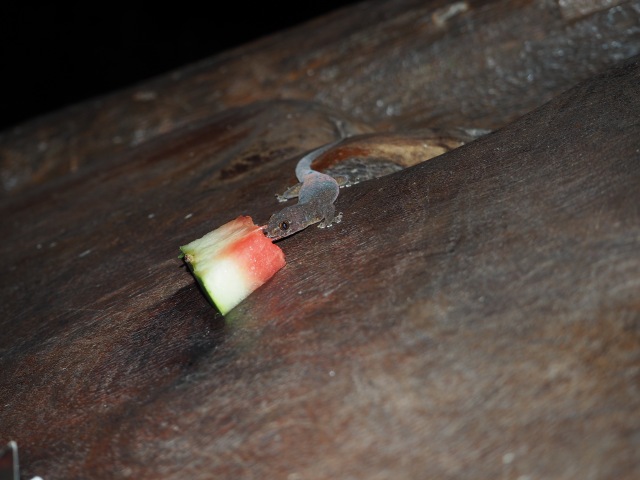 I watched as it first lapped at the watermelon and then began to take little bites of the flesh and rip them off by shaking its head.

2 thoughts on “Friends For Dinner”