At first glance whip scorpions or vinegaroons, as they are more commonly known, may look like the stuff nighmares but these seemingly ferocious creatures are actually harmless, for the most part, and pretty good creatures to have around your home. Here are a few facts about these cool little creepy crawlies:

Whip scorpions can be found in tropical and subtropical areas around the world excluding Europe and Australia and there is only one species found in Africa.

Despite looking like a nightmarish spider-scorpion hybrid, whip scorpions actually belong to very small order of their very own, the Thelyphonida.  Just how small is this order you say; well to put it into perspercive the order Araneae (the spiders) has more than 40,000 species and the order Scorpiones (the true scorpiones) has approximately 1700 species, Thelyphonida on the other hand consists of a mere 100 species

Whip scorpions have two glands at the base of their tale/telson which store a liquid which is primarily composed of acetic acid, the key ingredient of vinegar, hence their alternate name ‘the vinegaroons’. This acetic acid can be 15 times stronger than that found in household vinegar but most species don’t have strong enough acid to do any damage to skin, needless to say you probably wouldn’t want it to get into your eyes.

Whip scorpions see with their legs.

Although these critters have 8 small eyes, they aren’t their primary tool used for finding prey; instead these arachnids use their tails and those very long, spindly front legs, to feel  around their surroundings. If you ever watch one you will notice them extending their long front legs out infront of them tapping them on everything much like a blind person using a cane. Once they find something, they use their monstrous pedipalps/ pincers to impale and crush their prey and drag it into their mouth.

After the female has been fertilised she crawls into her burrow and seals herself in. When she lays her eggs they are in a protective broodsac which she attaches to the bottom of her abdomen. She remains in the burrow for months, refusing to eat until the eggs hatch into their post-embryo stage. These small white babies then crawl onto her back and attach themselves with special suckers and stay there until their fist molt. After their first molt they look like miniature adults and begin to feed and leave the burrow. 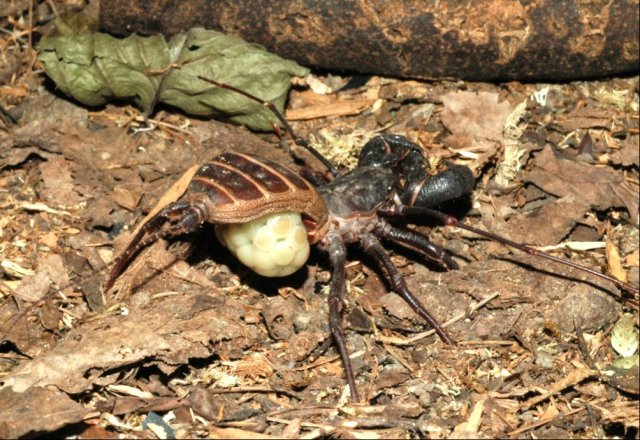 Vinegaroons are an important part of the ecosystems they live in.

These critters are nocturnal hunters which eat other insects including those you might not want in your house like cockroaches, scorpions and centipedes. So, before you reach for the bug spray, just remember that although these critters look terrifying they are probably keeping the numbers of creatures you really don’t want around your home down.

So next time you see one of these fearsome looking beasts scuttling across the floor I hope you’ll be able to look at it with a new found appreciation and not run away screaming! Happy exploring!