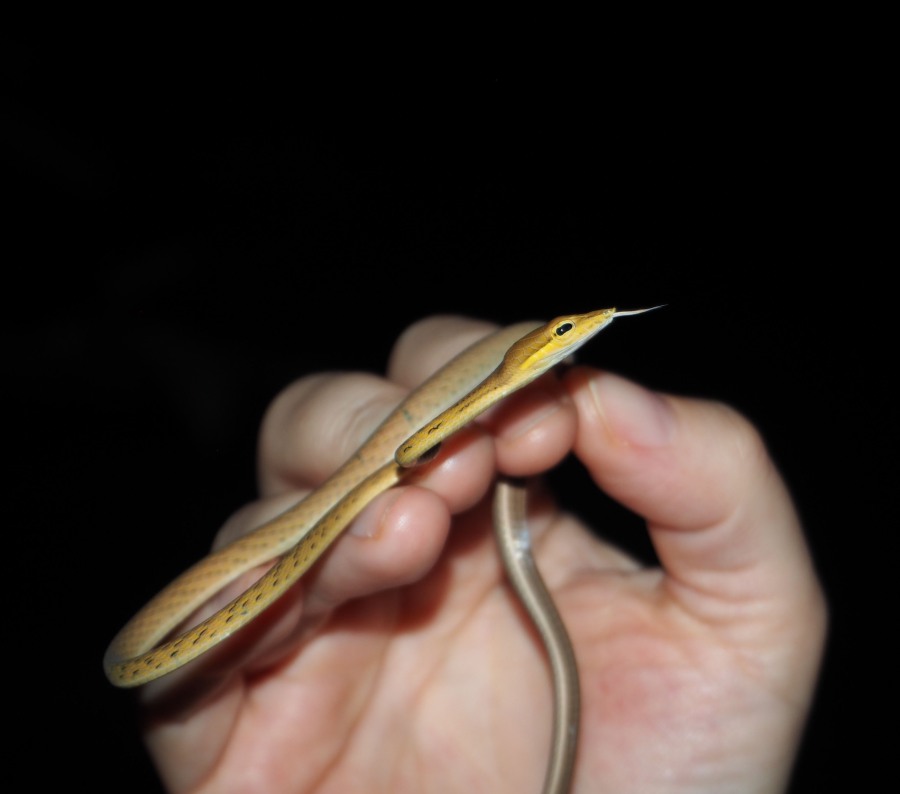 It hadn’t even been a week since we had relocated Bob when I received another message from my friend’s husband (who had also given us Bob the Python) saying that he had another python, along with another snake that needed to be relocated.

We were coming home from a shopping trip to a different province when we received the message about the snakes so we had to arrange to meet up somewhere on our way home. When we met up he presented me with two large sacks; the first had the python in it and the second held the other snake. I asked about the second snake and he told me he didn’t know what it was, just that it was small. As I carefully peered into the bag I was relieved to see that it was just a small Barron’s Kukri snake (Oligodon barroni) staring back up at me! This was much more preferrable than an angry cobra or a krait!

It was quite a surreal feeling to be driving home with lots of bags of shopping and two bags of snakes on the back seat!

As soon as we got home I put our torches on charge, excited at having a good excuse to go and look for snakes, like I needed one! Seeing as we were going out to release the snakes we decided we might as well make a proper herping trip of it and see what else we could see.

We saw two snakes within the first ten minutes, both of which were Red-necked Keelbacks (Rhabdophis subminiatus) asleep on low bushes near the path. 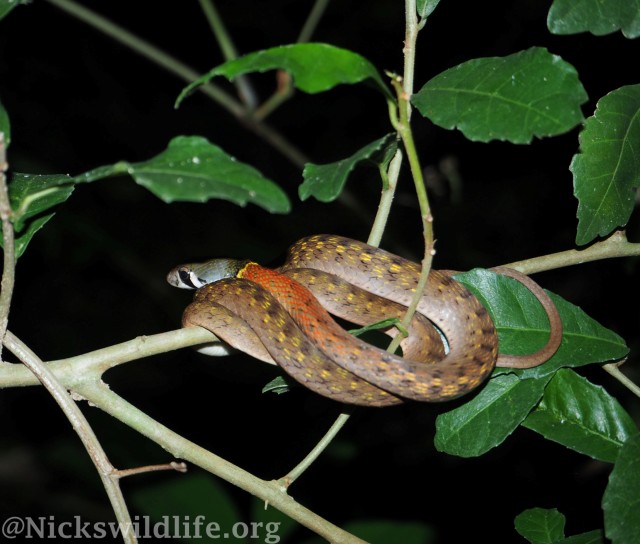 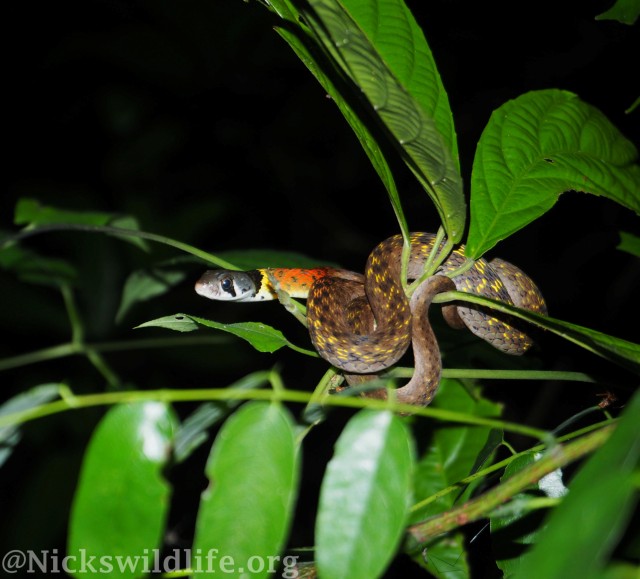 We reached the area where we had decided to release the python and I gently took it out of the sack and put it on the ground near the stream. Unlike Bob this python didn’t stick around long. As soon as it was free of the bag it quickly slithered away into the shadows. Fingers crossed it’s still up there doing well. 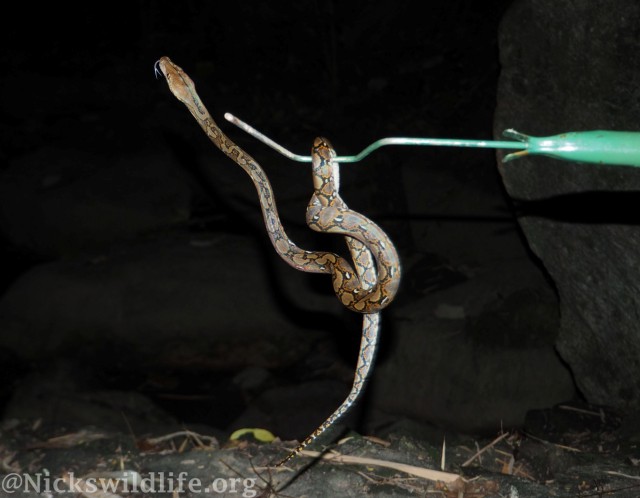 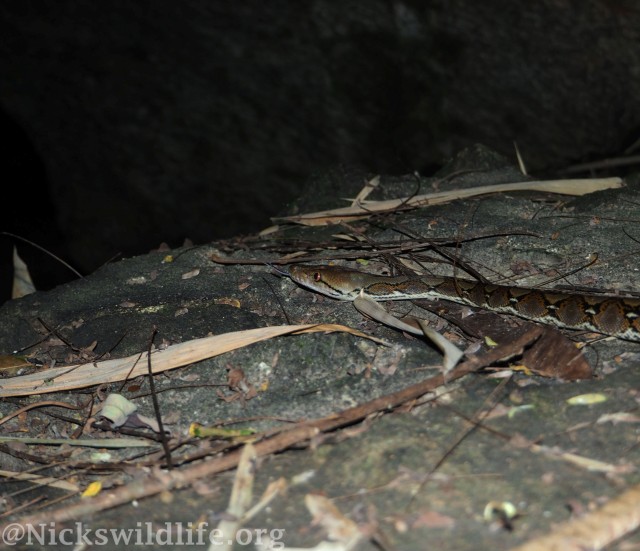 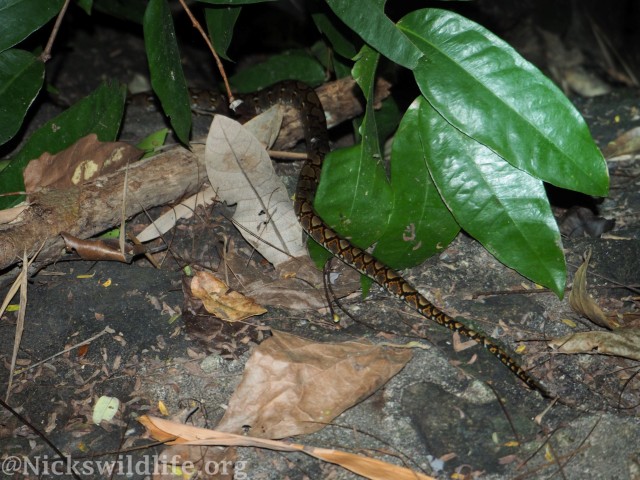 We released the kukri a little further up the path and were happy to see that after a little exploring it had slithered up a bush and coiled up on a branch for the night. 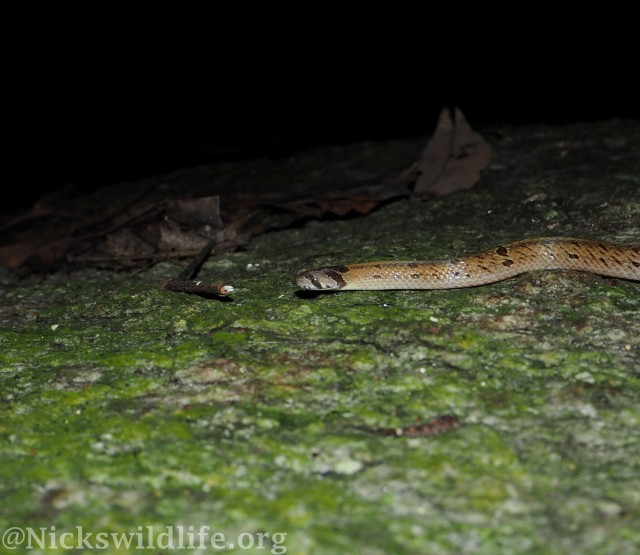 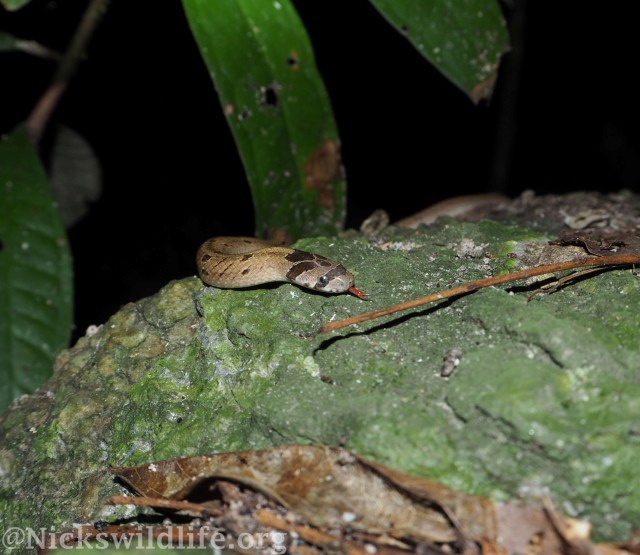 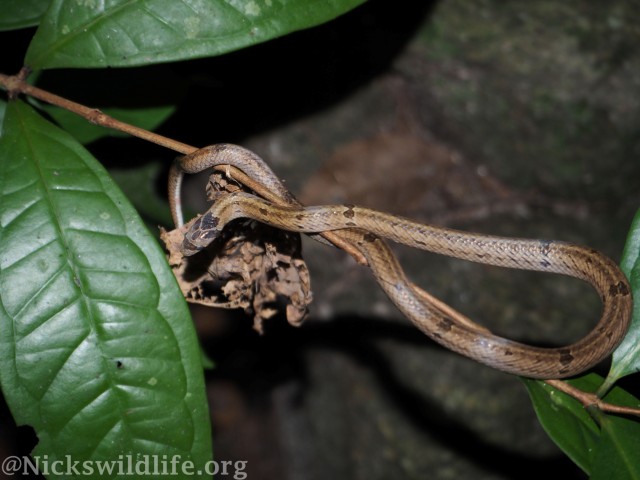 With both snakes released, we wished them luck and continued on our way to see what other snakes might be about.

A little later on we were seaching in and around a tree where we usually see Laotian Wolf Snakes and I noticed something small coiled up on a branch above my head.

Carly was quick off the mark and almost immediately identified it as a vine snake, and sure enough as I gently brought it down to our level with my snake hook we could see that it was indeed a vine snake (Ahaetulla prasina).

It was a beautiful yellow colour with black flecks on the scales and white markings inbetween its scales. It was definitley a juvenile, less than 30cm long and its neck was impossibly thin, no wider than a few strands of spaghetti.

The vine snake wasn’t too keen on our torches, but as long as we kept the lighting to a minimum it was really calm and easy to handle. Unfortunately it rarely stayed still for more than a few seconds which made it extremely tricky to get good photos of. 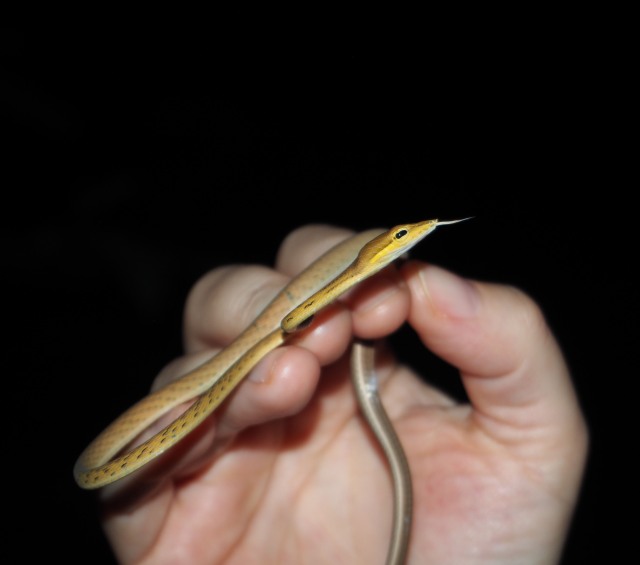 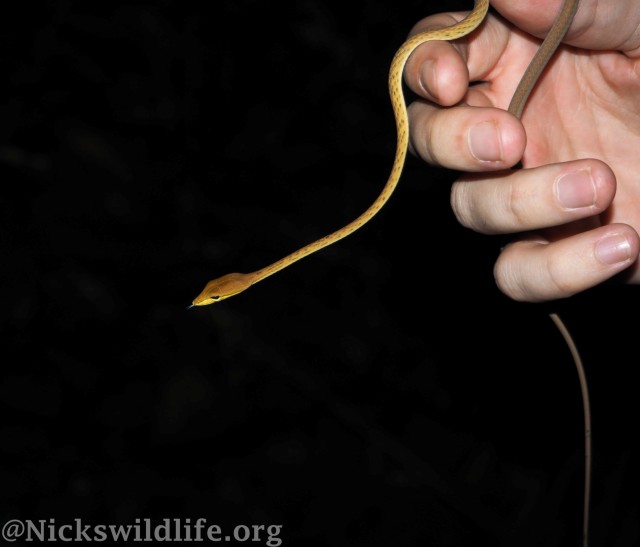 That wasn’t the only vine snake we would see that night. A little later on we spotted a much larger vine snake, this time just over a metre in length.

Just like the first, it was a little skittish in the torch light, but was a pleasure to handle and beautiful to watch. Like the other arboreal species we have encountered, it had the remarkable ability to extend and support almost half of it’s body length in the air. 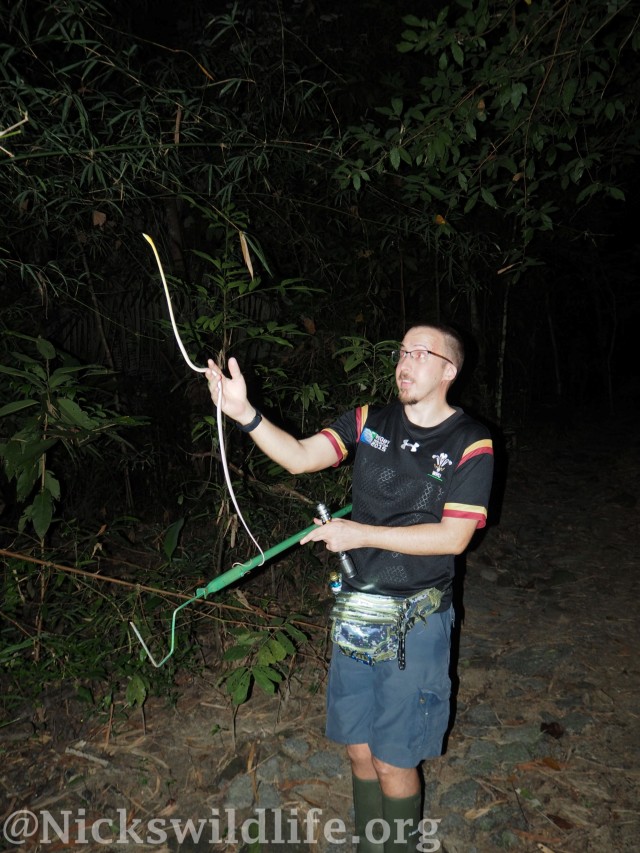 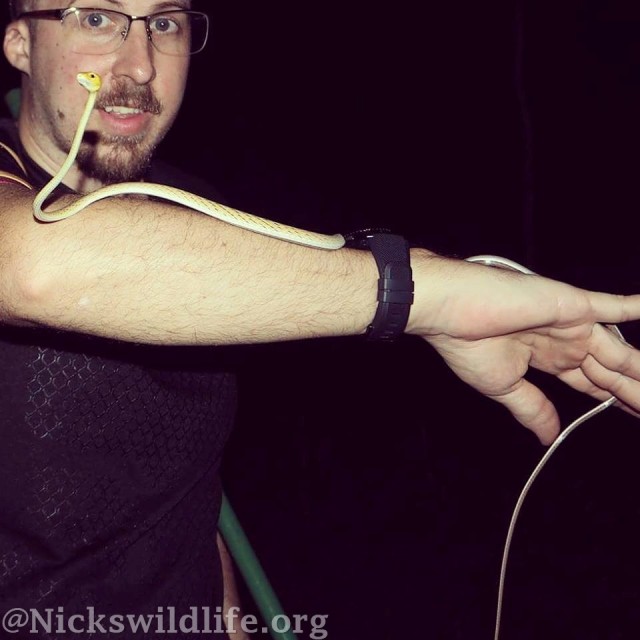 Carly always wants to handle snakes but we rarely see snakes that are non-venomous and non-bitey! I was so happy that this snake was such a relaxed specimen and it gave us both ample time to just watch it and admire its beautiful colours up close. 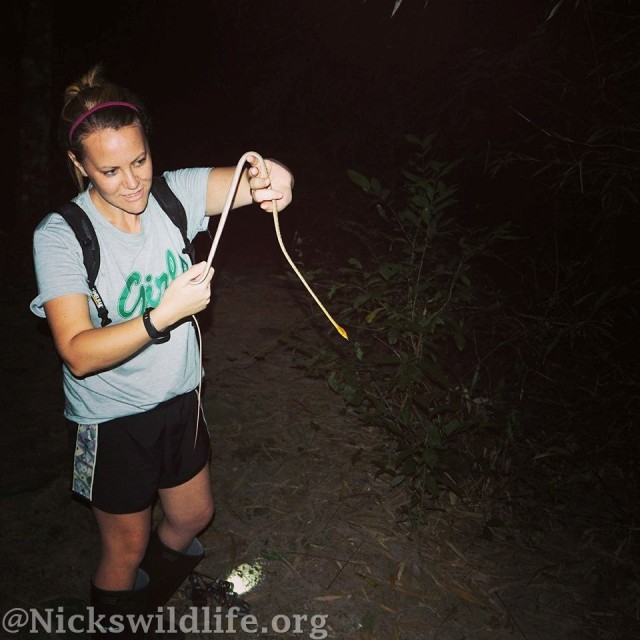 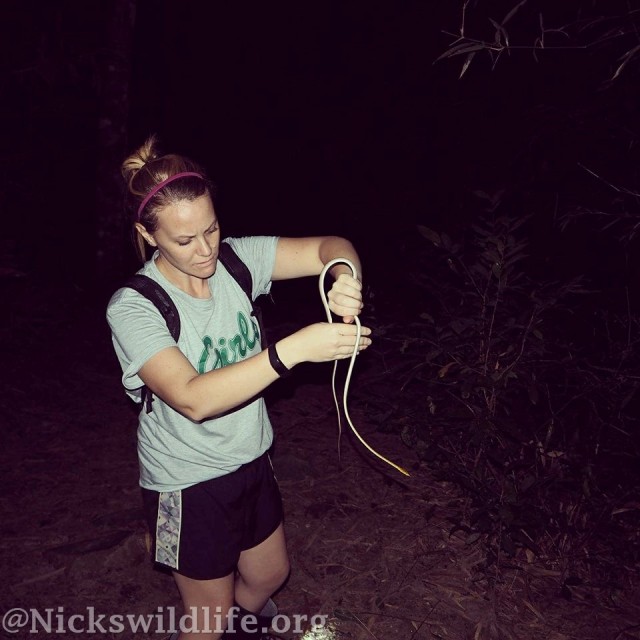 It wouldn’t be a night walk without a few cool insects spotted along the way, so here’s a few of the one’s we spotted….

We saw this huge stick insect which was as long as my forearm: 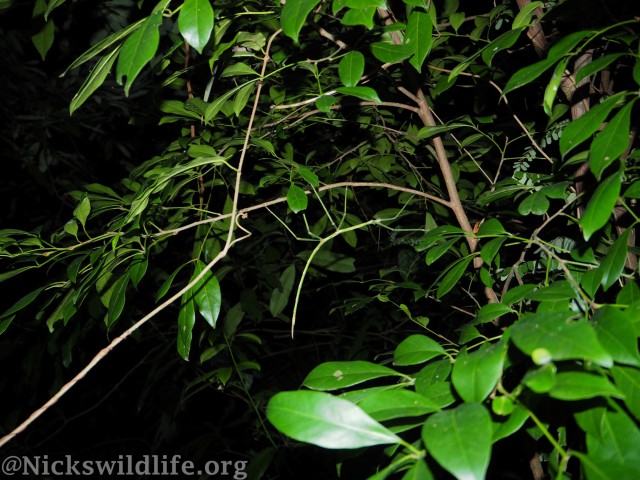 This ‘disco bug’ as Carly called it shimmering on a small leaf. 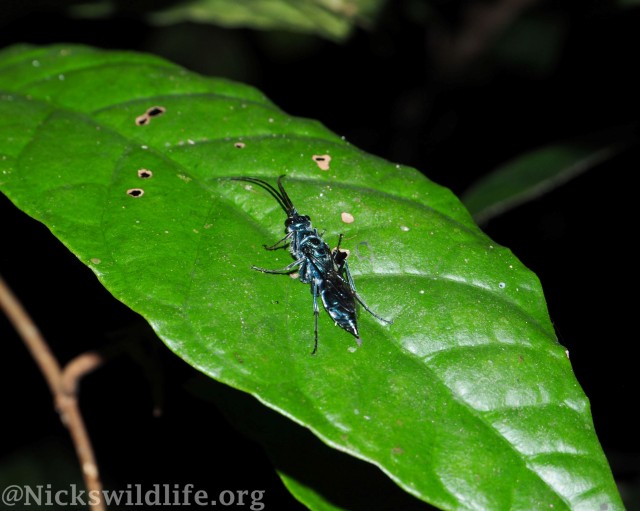 This tiny derbid planthopper on the underside of a leaf: 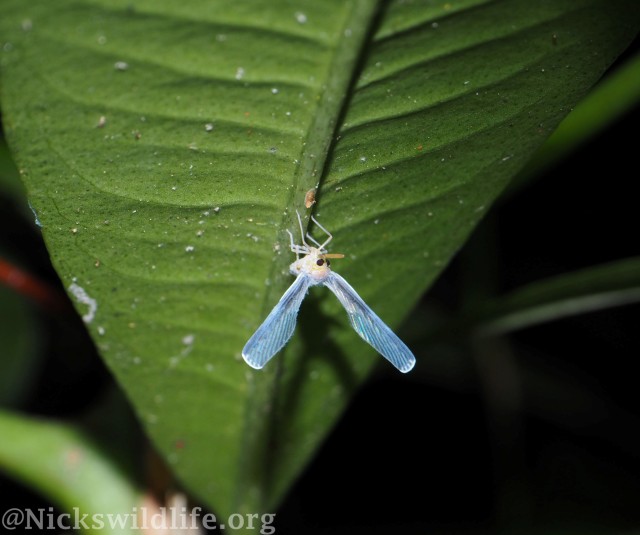 Of course there were some pretty moths out as always. 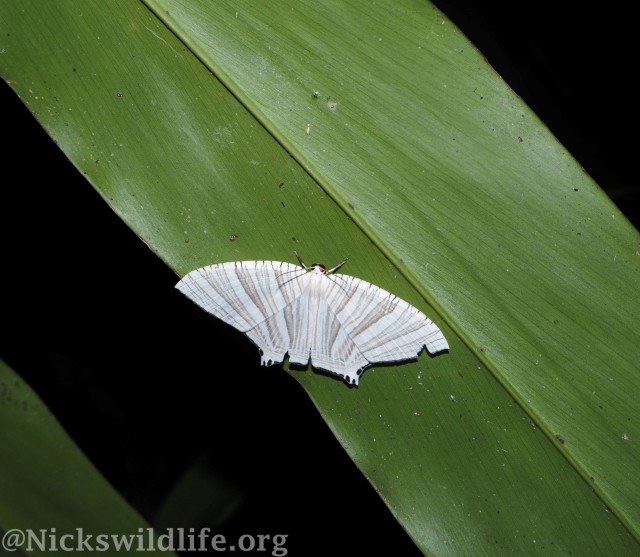 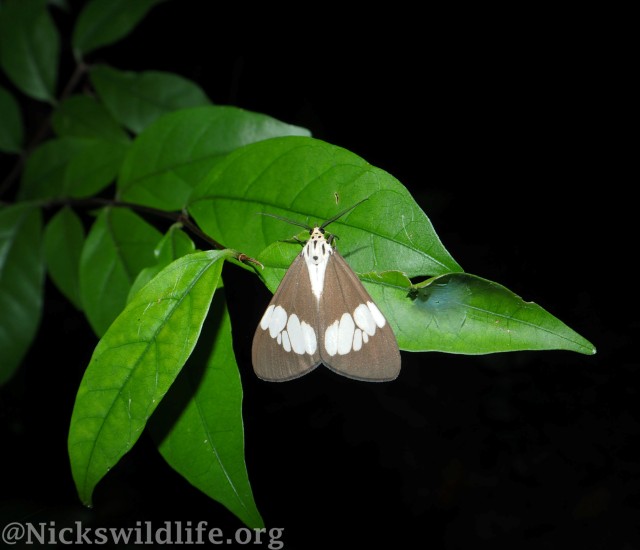 I hope both the python and the kukri snake are both doing well and growing bigger and stronger each day and that Bob, the other python we released a few days earlier is doing well too. You can read more about Bob the  python here