Sunday rolled around and the weather nice, so both Carly and I decided to head out to our favourite national park for a wander and a bit of wildlife spotting.

As we drove into the park it became apparent that the butterfly season was well and truly underway. Every puddle seemed to be edged by a multitude of butterflies and as we drove down the rocky road through the forest in the dappled sunshine every few meters or so butterflies would take off from the road and fly in front of our car as we drove.

We parked up and headed straight to our favourite spot to look for snakes. There were lots of butterflies everywhere but sadly no snakes this time. Although I did spot this very cool beetle.

We decided to walk towards a large waterfall that is only a short walk a long a well maintained trail. After  we saw a few groups of people heading down the trail ahead of us we decided that this time we’d avoid the other visitors and take to the water. We  headed away from the trail, waded into the cool water of the river and started to wade up stream looking in every overhanging bush and tree as we went.

I was surprised  to spot a snake in the very first bush I looked in, I couldn’t believe my luck; and as an extra bonus it was a species I’d never seen before. What a start to our walk!

As we continued our walk we saw a multitude of butterflies, and quite a few that I’d never seen before but the most impressive had to be this one whose tail waved like a snake when it flew and even when it landed.

We were also lucky enough to see these beauties too. (You can view the full size photos in the butterfly gallery here Butterflies) 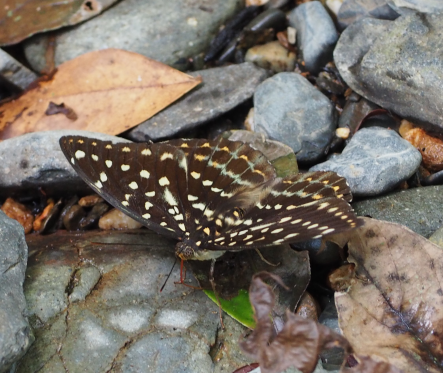 Butterflies weren’t the only new species we spotted that day. I also spotted two damselfly species I’d never seen before

We came to a point where we couldn’t go any further and decided to turn around and wade back down the river to where we got in. We didn’t spot much on our return trip and so we decided to head off for another adventure in a different part of the park.

We decided to head through the forest this time to a waterfall with crystal clear water where we like to cool off after a humid walk. As we walked we were treated to the usual whine of a thousand cicadas hiding in the trees. This time though I was determined to at least see one of these creatures, after all, if they were going to belt out obnoxious white noise the least they could do is show themselves for a photo or two. After a lot of searching I came to a point on the path where one of them sounded close by and after a lot of looking at tree trunks and vines I spotted the loud little guy. He was very well camouflaged and it was hard to believe that such a small innocuous looking creature could be capable of such loud and annoying noises.

We didn’t see much more for a while after the cicada but then suddenly as we walked through the trees we heard a commotion up above us. Ahead of me Carly was frantically pointing and gesturing saying “monkeys, monkeys!” I dashed over to where she was  just in time to look up and see a group of gibbons gracefully swinging through the trees with their long slender arms, and then they were gone.  I found myself thinking how lucky we’d been to see so much wildlife already and then on top of it all we’d seen a group of gibbons. It was the perfect end to the day and an amazing wildlife weekend.

3 thoughts on “The Wild Weekend Continues”