What a weekend, and where to begin?

I guess I should begin on Friday which seemed to be the perfect lead in to a great weekend of wildlife. I took my students on a nature walk around school in which we were surprised by a very patient Lime butterfly which perched on a branch long enough for me and some of my students who were nearby to get a good look and some photos. During the walk I spotted some of my students looking around a fallen tree for wildlife. Not a bad idea I thought as I wandered over to have a look myself. As I walked around the tree, a vine twisted through a few dead branches caught my eye. It was a greenish grey colour that just screamed out for a closer look. Then, as I moved closer, I saw a head, eyes and a flickering tongue. I could hardly contain my excitement, I tried my hardest not to rush or scare it away with any fast movements. I slowly swung my camera round and snapped off some shots as it did its best to pretend that it was a vine.

I called some students over after I’d taken a few quick photos telling them to come over slowly, and where to stand. Once the students where in position (a safe distance away) I told them what it was and where to look. In hindsight I should have probably told them it was a snake before they came over, after some shocked and  worried expressions they were happily snapping some photos for themselves and the snake didn’t seem to mind and stayed quite still throughout.

In my excitement I hadn’t actually managed to get any good photos of the snake. I was a bit dissheartened but the excitement of seeing a snake in the first place soon overcame my disappointment and my week ended on a pretty positive note. 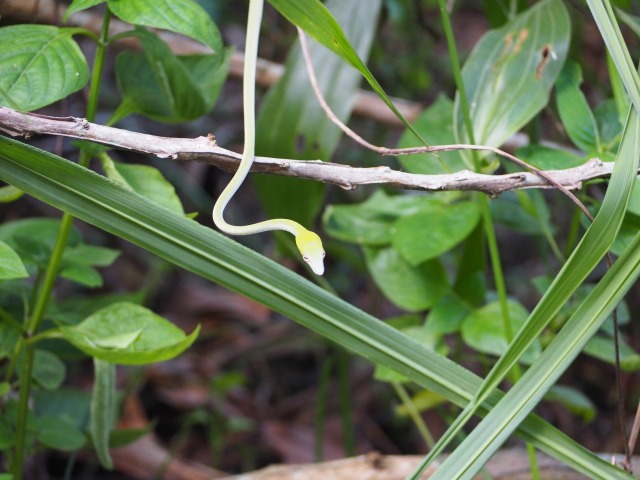 Saturday was another good day for spotting wildlife. We had had a lazy morning and sometime after midday we’d decided that we’d have a drive to a couple of waterfalls that are pretty close by.

Once again there was plenty of wildlife to see and I happily wandered around camera in hand snapping photos and here’s what I saw…..

and lastly when we got back to the house I spotted this robber fly perched on a root of one of our orchids.

It always feels nice to get out of the house and be outdoors on the weekend and of course for me if that can include a little bit of wildlife spotting I’m pretty happy. So far the weekend had been great wildlife wise but the best was still to come…………

2 thoughts on “A Wild Weekend”