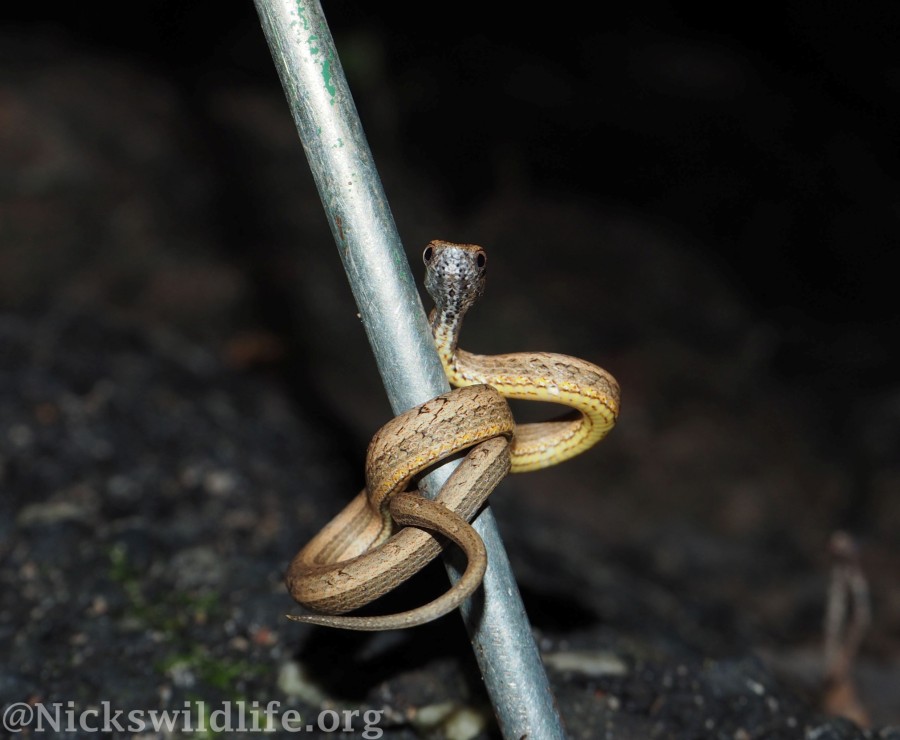 Its been super busy at work at the moment and finally all the work was finished and we had a long weekend coming up. It had been raining most of the week and finally there was a little bit of sun on thursday and Carly said the magical words to me “do you want to go and look for snakes tonight?”.

After only 5-10mins I spotted a Red-necked Keelback (Rhabdophis subminiatus) sleeping on a bush very close to the start of the trail. Like us and the rest of the keelbacks we saw that night it was being plagued by mosquitos.

After the keelback, we decided to check out a different area, this time near a stream. Before I’d even made it down the slope to the stream I spotted a long green snake. I slowly edged along the steep bank until i was close enough to the snake to see that it was a beautiful Green Cat Snake (Boiga cyanea). I coaxed it onto my snake hook so I could bring it closer for a good look and was a little suprised at how long it was. It easlily spanned the full length of my hook and I estimated it to be almost a metre and a half in length. 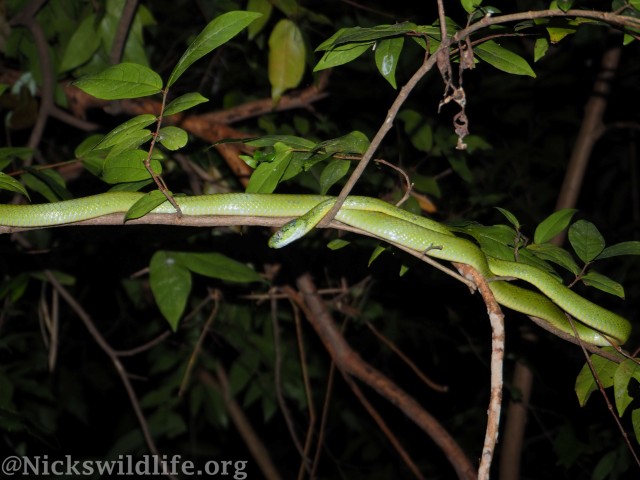 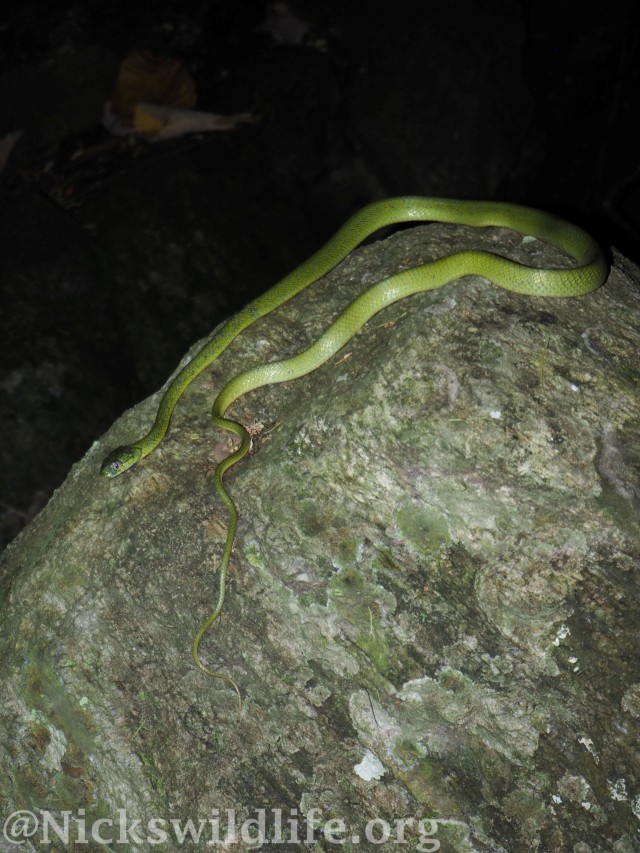 Next was an amazing Mock Viper (Psammodynastes pulverulentes). I’ve always wanted to see one of these snakes but I’d never imagined they’d be so small. I have no idea how Carly even managed to spot it. At full length, they are about 77cm, but this one was minuiscule, only about 13cm. One of the cool things about these snakes is they can actually change their pupils from round to vertical slits when they feel threatened to make them look more like a real viper. This one must have been relatively relaxed because its pupils remained round in all the photos we took.

We were buzzing after having seen three snakes, especially two that we’d never seen before. We would have been quite content to call it a night, but we decided to see how far our luck would take us.

On the way up the path we spotted another two red-necked keelbacks asleep by the side of the path. 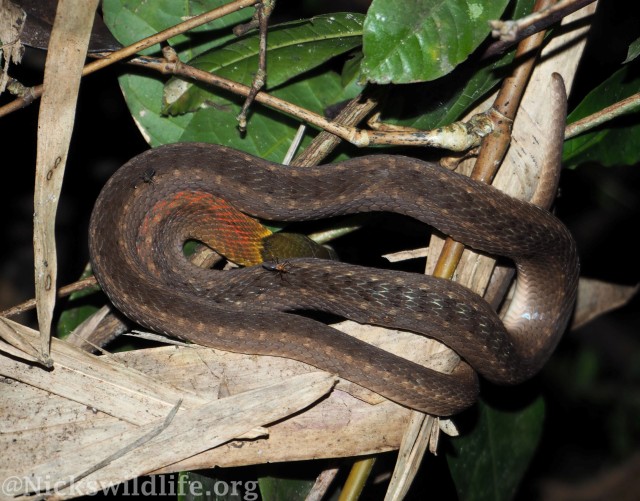 Our tally was now up to 5 snakes and we couldn’t belive our luck, surely there couldn’t be anymore snakes to spot?

There were! I saw another keelback asleep on a bush but there was something different about this one. It was through some thick vegetation, and as we carefully edged closer I could see it was a Green Keelback (Rhabdophis nigrocinctus). It was hard to get photos of because of its location and as we struggled to get a better view it decided it had had enough and leapt onto the floor, paused for a second, and then slithered off. Damn! Yet again we didnn’t manage to get a whole body shot of this species. I’m now making it my mission to get a decent shot of it by the end of the year.

What a night, six snakes, we were both happy and ready to call it a night and head back home. Carly and I had spotted three snakes each and we decided to make it a little competition to see who could spot the next snake. I joked that I “didn’t mind” her winning and she said that that was “nice” of me but she was gonna see another before we got back to the car!

The car was in sight and I decided to have one last look in some bushes near the car park when Carly shouted that she’d found a snake, and what a beauty it was….Carly 4, Nick 3. 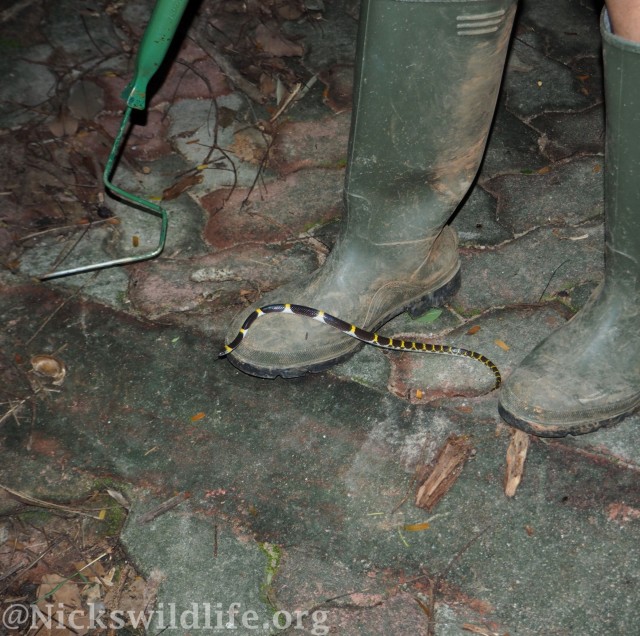 This walk was the most successful trip to date and it’s taken our total to nine snake species (18 individuals) in only six visits to this location.

The nice thing about going out looking for snakes in Thailand is that even if you don’t see any there’s always something else cool to see. This night was no different and between spotting snakes we were lucky enough to see this giant Saturnid Moth (Samia canningi) 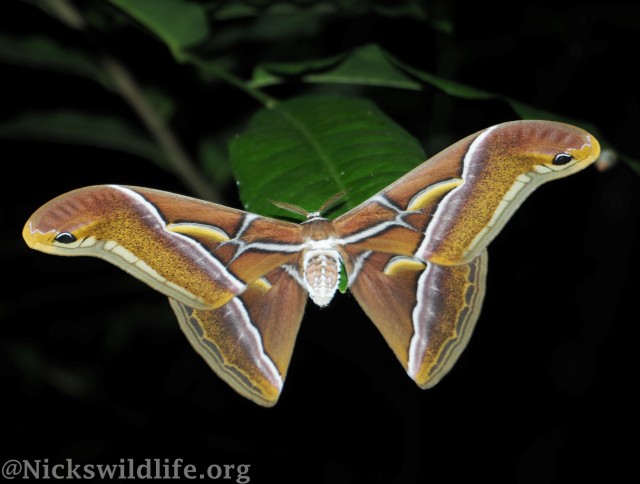 Glad you dropped by and checked out this latest post. If you see anything cool, let me know or send me a picture on Wild Thailand or if it’s a snake on Thailand Snakes and other Reptiles! I’m always excited to see what you guys have spotted and I can maybe help with I.D.