Well as some of you may know, my wife and I have relocated to the UK. It was a move that I was looking forward to, but also fearing, as I knew I wouldn’t be having any herping adventures for a while.

This in mind, I made it my task to make the most of my wonderful surroundings and find as many snakes as I could in our remaining time in Thailand (not an easy task with so much to do before we left). I had to get a couple more nights of herping up at my favorite local spot and once again it came through for me and I was able to see some cool Thai wildlife.

Among my favorite finds were two Black-striped Keelbacks (Rhabdophis nigrocinctus). These snakes might not seem that interesting to some but I have a little history with them………….

I have seen them a few times but never managed to get any clear photos of them. They always seem to be on the move or obscured by vegetation. I had seen one at this spot before on Seven Snake Night but once again, only managed to take one terrible photo before it dropped down from its perch and disappeared into the darkness.

I was elated when very early one evening I found one of these elusive creatures asleep on a bush. It was a beautiful juvenile with a bright golden-green body and a distinctive pink neck that faded into a chocolaty brown on its head.

This time I wasn’t taking any chances, I took pictures from quite a distance away and then slowly crept forward taking photos after each step I took. Unlike the Red-necked Keelbacks; and much like the all other Black-striped Keelbacks, this snake was very flighty. It was quite sensitive to the light and would begin to slither away if I got too close or cast too much light on it. I was delighted that it remained relatively still and allowed me to get a few pictures, what a great start to the evening! 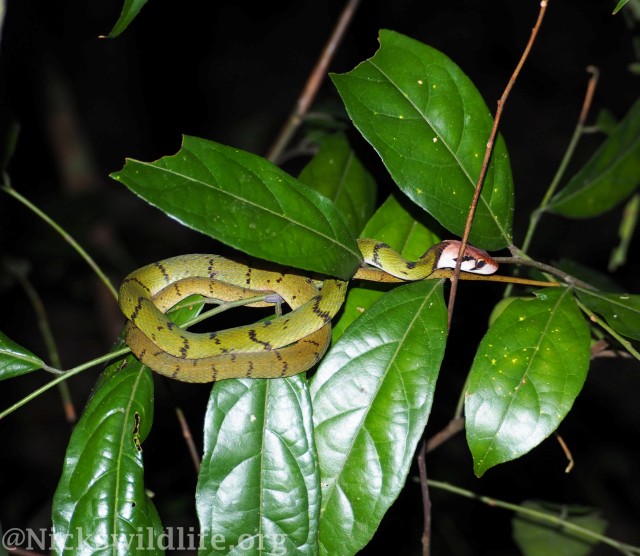 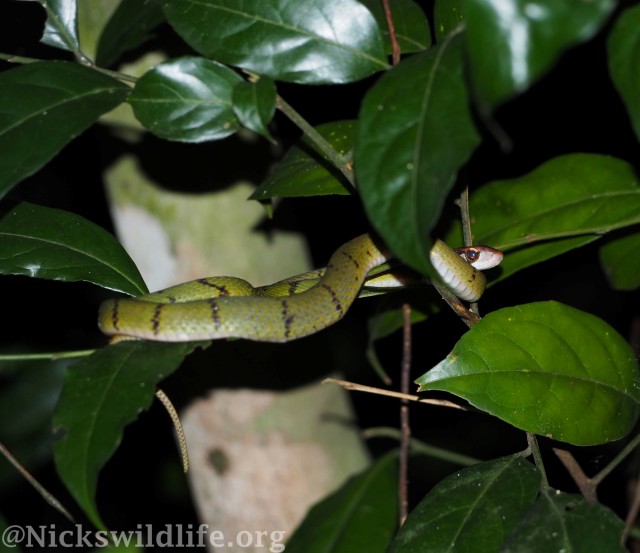 The same evening I was searching an area that looked very ‘snakey’ when I spotted yet another Black-striped Keelback. I couldn’t believe my luck, I’d visited this spot numerous times since I’d first spotted one and never managed to see one and now I’d seen two within 15 minutes.

This one was duller in colour but a lot more impressive in size being twice as long and wide as the first, especially with what looked like a decent meal digesting in its stomach.

One of the things that I love about my local herping spot is the diversity of wildlife it holds, not just snakes but amphibians, insects and mammals too. On one night I counted seven species of frogs in a small marsh area.  I don’t always snap photos of frogs unless it’s a species I haven’t seen before but some I just can’t pass by. Case in point was this  photogenic Common Tree-frog (Polypedates leucomysax) sitting in the water that had collected in a rubber collection pot watching the world go by.

The Black-striped Keelbacks weren’t the only snakes I saw, I was lucky enough (depending on who you are) to have seen a couple more Malayan Kraits (Bungarus candidus). The first I spotted was this beautiful Beetlejuice-esq  juvenile which took me quite by surprise……..

I had taken a new herper out on one of the trips and was explaining to him to watch where he put his feet as we sometimes see snakes right on the path.  Just as I’d finished my mini safety briefing I turned around and there it was; right by my feet one of Thailand’s most venomous snakes, the Malayan Krait.

There were still more snakes to be found before we left such as this Mock Viper (Psammodynastes pulverulentus). These snakes can be so easy to miss due to their small size and good camouflage. Luckily for me this one was perched on a wispy branch right next to the path with it’s twig like colouration contrasting with it’s very green background. 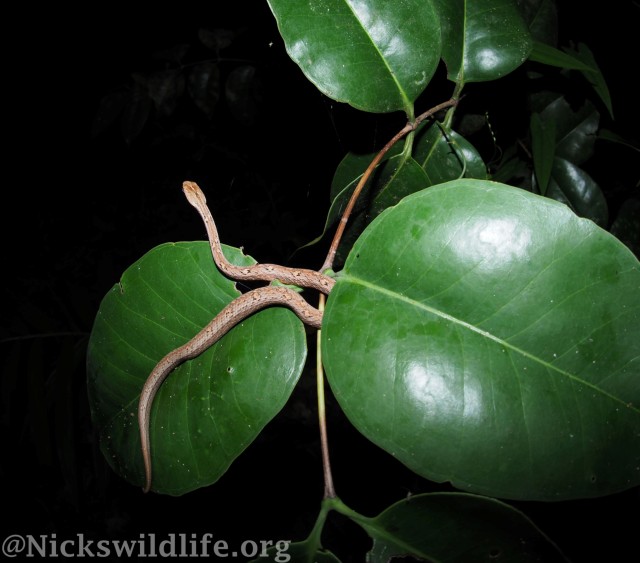 The last snake was this Banded Kukri (Oligodon fasciolatus) asleep with it’s head tucked up under a leaf.

As always we turned up more than just herpetofauna and this other-worldly caterpillar  to cool looking to pass by without snapping a shot of. 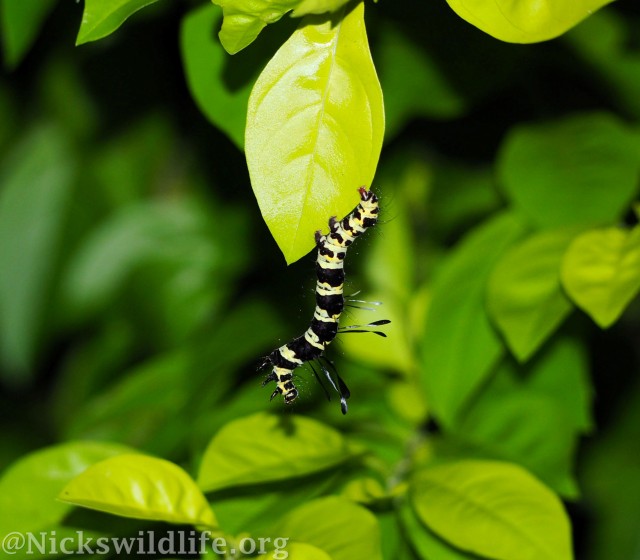 Although there’s definitely a lot less herpetofauna in the UK ( 3 species of snakes compared to 225+ in Thailand) I am going to try to explore as much of the UK wildlife as possible, so expect updates soon.